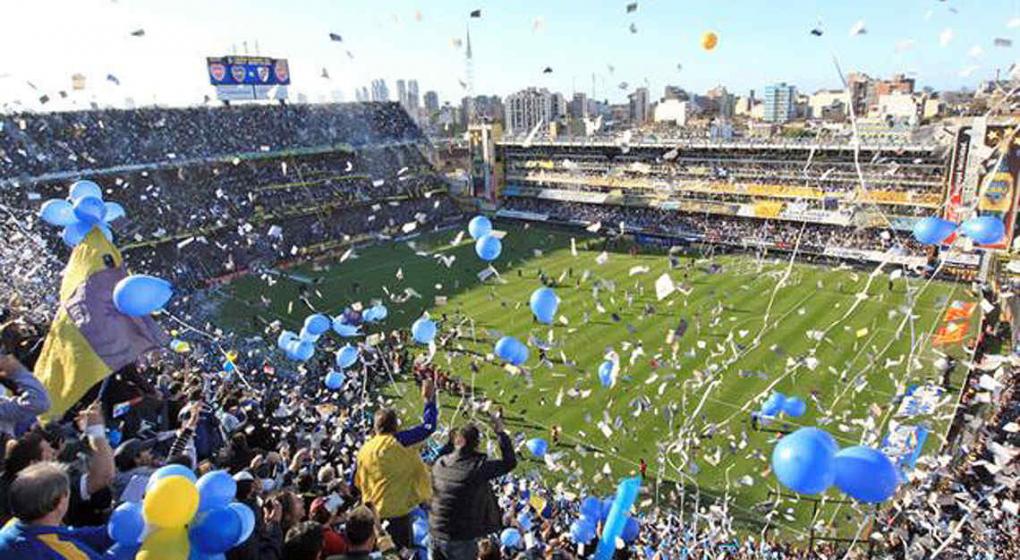 La Bombonera is the Boca Juniors stadium. As it is not difficult to imagine, it is located in the La Boca district, in the center of Buenos Aires.

La bombonera owes its name to its singular shape that resembles a box of chocolates, or bom boms. Boca’s team was the Genoese’s immigrants favourite, so till this day Boca fans are called xeneises (“Genoese” in Genoese dialect). They are very proud of this Genoese heritage, to the point that Boca’s website is translated into three languages: English, Italian and Genoese.

Initially, the stadium was made of wood. In 1934 the Slovenian architect Viktor Sulčič was commissioned to rebuild it.

Now the stadium only hosts local fans, around 50 thousand spectators, and club members get priority when it comes to purchasing tickets. In Argentina soccer teams don’t have an owner, as they do in most of the countries, they are sport associations instead. Boca Jr. is a sports association that offers men’s and women’s soccer, volleyball and basketball teams.

Currently Boca has around 75 thousand members, of which 50 thousand are active. In order to access the stadium, active members must be free from all debt with the club.

Anyone who wants to go to see a Boca game during a league game must find a member subscriber who “sells” their access. Tickets are in fact very expensive because they are impossible to find directly. There are intermediaries that sell these accesses to tourists. My personal recommendation, however, is to avoid them.

An alternative is to attend a Copa Libertadores and Copa Argentina match, where tickets are sold to the general public.

GO TO THE STADIUM

If you are a soccer fan I really recommend that you try to attend a Boca game because it is a unique stadium in the world, regardless of your football tastes. The stadium, thanks to its particular shape, encompasses the soccer field, and the fans and their joyful choreography make you feel at the center of a great show. It is really something else compared to European soccer matches!

Attention: to access the stadium, bags and backpacks will be checked: sharp objects (such as biro) are not allowed in. Bottles and cans are also forbidden. Inside the stadium there is a public bar and you can also find the usual street vendors who travel through the stands (prices are reasonable).

On the occasion of the games, the streets around the stadium are closed and full of street vendors selling salamis, meat sandwiches, merchandising, drinks, etc. The neighborhood residents also become temporary entrepreneurs by opening their windows in order to display and offer items for sale. There are those who simply grill more meat than necessary for their Sunday family barbecue so that they can sell the rest on the street.

There are several entrances to the stadium, depending on where your seat is located. Once you arrive at your place, you will feel like in the middle of a stage. I think the football game is no more than just half the show – the fans take the stage!

To set the mood, fans sing songs to the beat of the drum and throw yellow and blue stripes, balloons and confetti. People sing and jump in unison and the stadium does not tremble; it beats like the heart.

Even I, who am not a huge football fan got excited at La Bombonera.